TAG! Not Just Another Game at Camp 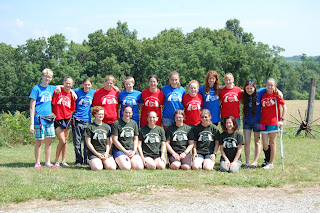 Twelve teenage girls, twelve dogs, four days and three nights. How does one manage that without yelling, nagging or feeling frustrated? Seven years ago, we started a 4-H dog camp along with another friend. Teenagers and their dogs come to camp and try a variety of activities: agility, obedience, tracking, nosework, flyball, and anything else we can imagine. Teaching the activities is the easy part, but how do you manage that many campers and dogs? TAGteach to the rescue!

The first few years of camp, we attempted to use TAGteach based on what we had been able to pick up on the internet and applying the principles of clicker training to people. It went... okay.  There were parts that didn’t seem to work and we had a hard time implementing it.  The campers still had a good time, but it simply didn’t work as smoothly as we wanted it to.

We Went to a TAGteach Seminar!

Yes, the tag points are important and the reinforcement schedules we have developed make a huge difference, but for us, the real value comes in how we think about our campers.  We teach with positive reinforcement at camp. Period. It doesn’t matter if you are a dog, a camper, a counselor, or our nurse (though we do make a special exception for any stinging insects that enter our cabins!) we give you the privilege of learning in an environment free of intimidation, fear, yelling, or nagging. The shift into TAG thinking is what has allowed us to do exactly that.

An Amazing Shift in Mindset

For example:
We do all of our own cooking at camp and the campers use real plates, cups and silverware.  This means that there are quite a few dirty dishes produced in one meal. One year, after spending too much time washing dishes, we had the brilliant idea to simply inform the campers that the tag point is: wash a dish. Each dish washed earns them a tag.  Now, instead of having to nag them about washing dishes we simply say “tag point is wash dishes” and they get washed. We noticed an interesting phenomenon at camp that year. Campers were heard discussing who last washed dishes, but instead of it being in the vein of “I did it already someone ELSE has to do it this time” it was instead in the vein of “I have already had the dish washing opportunity for earning tags, who wants it now?” Which was an amazing shift in mindset for use to observe.

Also, as we have practiced TAG thinking, it has become more natural and creative and positive solutions to problems come easier to us. At camp this year, the campers were sent on the task of packing all of their stuff up right before the last camp activity.  As soon as they were all done, we would be able to head up. The problem was, there was a lot of procrastination and it was impossible to tell if a camper was finished packing and just hanging about distracting the other campers or if she needed encouragement to get back on task.

The solution came to us in the when A then B tag point: When you are finished packing, the tag point is Popsicle.  It worked brilliantly for several reasons. One, there was increased motivation for completing packing as the tag point was inherently reinforcing.  Two, it was easy to see who was finished packing. And three, it is harder to be a distraction to other campers if you have a popsicle in your mouth!

By continually consciously practicing the art of TAG thinking, we have been able to make TAG a natural part of camp. Our campers have benefited significantly from our efforts, and your learners likely will tool!

Click here for more information or to purchase the recorded webinar ($19.97)