Webinar: Using TAGteach to Reduce Fear (50% off for members)


Webinar: Leave It! Impulse Control for Teachers (Free for members)


Webinar: Information Overload - How to Say More but Talk Less (50% off for members)

The Three Try (or Less) Rule - How to Create Success


Learners can become frustrated and lose focus when they fail, especially if they are adult students.
This is why we suggest, the three try (or less) rule.  If a learner fails three times to meet the tag point criterion, go to a past point of success and move forward in smaller increments. In this manner you can build on success instead of searching blindly for a potential point of success. Of course the 'three try rule' isn't really a rule. The learner never has to fail three times. If it is clear the learner will not likely achieve the tag point criterion after the first failure, jump right in and clarify or change the tag point.

The best designed tag points move the learner forward but don't ask them to teeter on failure.
Some people have remarked after watching a TAGteach session or seeing some of our videos "they got a tag every time, don't they need to make mistakes to learn?" The answer is, no they don't need to make mistakes to learn. A TAGteacher will always try to set the learner up to succeed and never purposely make things too difficult. The whole point of using TAGteach is to create clear communication, encourage focus and build a desire to succeed. When the fear of failure is reduced, the learner can focus on the task at hand. Skill acquisition is accomplished quickly and without an undue amount of stress.

Watch this video of the three try rule in action. The learner makes three mistakes in a row. Instead of asking him to try again and risk frustration (and a full-on meltdown) the teacher goes back to a previous tag point and starts to build up again from there.

Tweet
Posted by Joan Orr at 8:41 PM No comments:


I had an extremely cool TAG session yesterday night. It was about teaching my loose leash protocol to handlers who started in a beginners' course today. I had doubts if I should do a TAG hour at all - I had one elderly lady, one person with severe health issues (spine problems, had several surgeries), some "serious" people in academics (e.g. PhD in Pharmacy) etc. --- and I could not imagine them playing "the dog". :-D In the end I gave it a try and it was a blast! 1.5 hours of laughing almost nonstop for all attendees - and they learnt SO MUCH. They said things like: "Bina, I did not realize that I pop the leash automatically every time I stop! This is awful, I am happy to know now." So they had very important self-reflections without feeling embarrassed - really wonderful. And the person with the spine problem was magically cured and even wanted to pretend to be the dog- four legged on the floor (which I do NOT ask from participants when playing "the dog"!!!!!), The elderly lady had to hold on to other people as she was laughing so hard she was afraid she would fall. We had a great time.

Today, the course started, and many said that they were happy to have the opportunity to hone their handling skills on humans and that they feel much safer now in the task with their dogs.

Great experience for me as a trainer.

Bina has created several tag points to help teach students her loose leash walking approach. You will need to watch the videos to understand the process and the tag points. This teaching is done without the dogs present. Students work in pairs and take turns pretending to be the dog. Here are some of the tag  points:


The directions are: Before the click, hold hand still

The tag point is: hand still


The directions are: After making eye contact, walk ahead

The tag point is: walk ahead


The directions are: If the dog crosses the toe boundary, turn 90 degrees

The tag point is: turn 90 degrees


The directions are: While redirecting the dog,

The tag point is: look at hand

How to Turn Criticism into Smiles 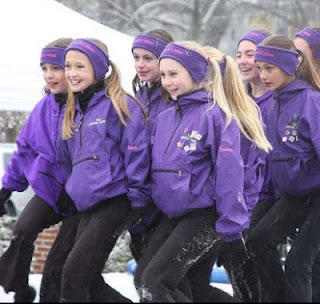 
Our dancers receive adjudications at competition often in the form of audio files - so the girls literally listen to the judges comment about their dancing. Many judges are very positive but just as many are "critics" and some can be quite negative.

There's no way I have the time to listen and edit each tape from each judge for each dance at each competition. For years I just didn't have the kids listen -such a shame as we WANT the kids to get input from these other teachers. Once we began tagging we realized that translating negative language would be an important skill to learn and so here's what we do.

As we listen to the tapes, our dancers use tally marks or stickers to note each "good" or "yay" comment as a tag. In another column our dancers write the negative comments translating to tag points. If a judge says "pretty costume" = Tag! "nice smile" = Tag! "Your knee is bent in your leap" = tag point is... Stretch knee. "You shouldn't be looking at the floor" = tag point is... Look at the audience.

The dancers have gotten so quick and comfortable at translation that they do it subconsciously. So much so that it's not uncommon for them to smile if I get grumpy at them. When I slip and use a negative, they're smiling cuz they're hearing the tag point! Not an excuse to get grumpy of course - just really nice to know that where ever they are in the world, they're translating.

More about A Dancer's Dream
Tweet
Posted by Joan Orr at 11:19 PM No comments: