Check out our cool TAGteach blog widget! This shows our recent blog posts and YouTube videos. If you want to have fresh TAGteach content at your website, just click on the "get widget" tab at the bottom of the widget, choose Flash or java script versions, click on the Copy button and paste it into your site using an html editor.

For more information or to register click here
Tweet
Posted by Joan Orr at 8:47 PM No comments:

TAGteach and Golf - How to Save Your Marriage 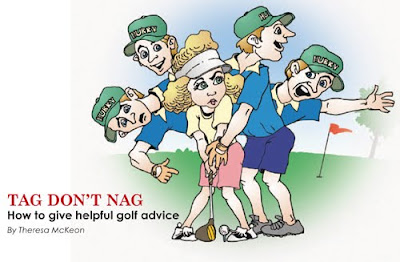 The birds are singing, your first shot speeds straight down the middle of the fairway and life is good! Suddenly, out of nowhere, unbidden and unwelcome, like a serpent choking the joy from your day comes... unsolicited advice. “Stand a little straighter ... open your stance ... close the club face a smidge ... take it back a bit further”. This well-meaning and often contradictory advice from golf buddies and spouses is rarely helpful and leaves you feeling frustrated and perhaps even a tad homicidal. Renowned golf teacher Fred Shoemaker in his classic book “Extraordinary Golf - The Art of the Possible” advises that spouses and friends can coach each other on the golf course if three rules are followed: 1) coach only when asked; 2) coach only what you are asked to coach; and 3) coach only for a specific amount of time.

A new coaching method called TAGteach™ provides a structured means of implementing Fred’s sage advice. TAG™ stands for Teaching with Acoustical Guidance and uses positive reinforcement to identify and strengthen successful performance. Correct moves or positions are marked with an acoustic tag (a click sound made by a mechanical device activated by the teacher). The teacher (formerly known as the nagging spouse) chooses one aspect that needs correction, helps the student find the correct position and then tags when the student performs correctly. The tag means “yes, that was correct”, the absence of the tag means self-assess and try again. There is no need for the teacher to provide any feedback other than “tag” or “no tag” to allow the student to learn.

The teacher using the TAGteach methodology sets the student up for success by increasing criteria in manageable increments and limiting unsuccessful attempts. If the student does not receive a tag within three tries, it is the teacher’s responsibility to create a tag point that is within the skill level of the student. In all cases, tag points are addressed one at a time and the student does not receive commentary on other errors even if these occur. Other issues will be addressed in future tag points. Because the criterion for success is the attainment of the single tag point and not the completed perfected skill, the athlete and student can focus on multiple incremental successes on that never ending road to perfection.

Watch this video in which professional golfer Christopher Smith talks about his experience with being tagged: 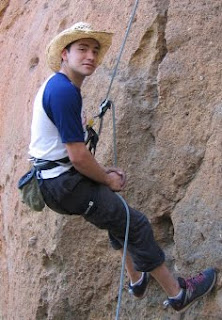 I first met Juan at the local rock climbing gym a few years ago. We are part of a greater group of friends affectionately known as the “Rock Squad”. While hanging out on the rock, Juan and I discovered that we both had the desire to work with at-risk youth. I had already been using TAGteach in my youth programs and suggested that he might want to check it out. He attended a Portland seminar which was focused primarily on autism. Juan’s creative personality got him thinking outside the box right away and on the 2nd day, he showed up with climbing ropes and harnesses!

Since then, Juan has begun to implement TAGteach into the Nike World Headquarters rock climbing gym, where he works as an instructor. He has used TAGteach with many novice climbers with great results. Most recently, Juan and I gave a TAGteach clinic at the Smith Rock Detour, an outdoor climbing festival attended by outdoor enthusiasts from all over the country. Juan has presented at 2 other seminars, one at which he tagged professional golfers for boxing and climbing skills! 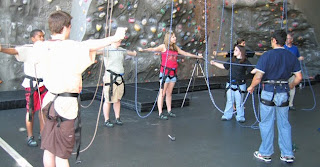 Juan was born in Mexico City and moved to Arizona when he was 4. He has been living in Portland Oregon for the past 7 years and has spent that time becoming an accomplished rock climber. He is currently sponsored by Mad Rock and Desert Scape and spends most of his time devoted to rock climbing and improving his climbing programs. He also works part time as in interpreter for local schools and hospitals. After a year of developing and refining TAG points for climbing, he said he is ready to implement TAGteach into all his classes at Nike. His hope is that tagging will be a way for parents to participate with their kids at the gym, instead of hanging back and watching. TAGteach has that added benefit of being a great relationship builder which will help set Juan’s class apart from others.

In the next few years, Juan hopes to focus his attention on building a solid climbing program with at-risk youth. Climbing has had such a positive effect on his life and he wants to give back to his community by sharing his passion with others. The work we are doing with the Juvenile Detention Center along with Juan’s continued development of TAG points for climbing should make this a reality soon. We’re just waiting for the funding to come pouring in!

Congratulations to Juan for receiving his Level 2 Certification this past year. It is well deserved for his commitment to TAGteach and his talent for teaching!

“Tagging teaches you how to be a more positive coach. It speeds up the time during lessons, leaving more time to apply them in the field. I love seeing the reaction when people experience it working first hand.”

Watch this video that shows one of several tag points that Juan uses in teaching rock climbing skills: 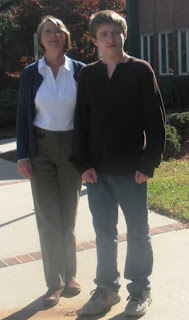 In 2004, Martha Gabler attended one of the first TAGteach seminars, hoping for help in teaching and managing the behavior of her son. A year and a half later Martha wrote to us telling of the success she was having and in a more recent update Martha sent us this photo and wrote this:


Can you imagine how difficult it would be to manage him (at that size) if he were still darting around like crazy, could not respond to his name or other verbal instructions, and had all those other horribly difficult behaviors of the early years? TAGteach has played a huge role into changing him into a manageable and delightful teen.


This is a wonderful success story and we are very proud and pleased that Martha was able to take the concepts and strategies we teach at our seminars and apply them to her interactions with her son.

Here is an excerpt from Martha's original report. The full article contains many useful details that hopefully will help others who are struggling with the challenges of raising a child diagnosed with autism. You can download the whole thing by clicking here.

A Letter from Martha Gabler: Writing from the trenches of the autism war…

I believe TAGteach has tremendous potential in helping children with autism, particularly in helping parents manage the often difficult behaviors of these children.

I am the parent of a 10-year old boy with severe autism who is non-verbal. Since learning about TAGteach approximately 1 ½ years ago, his behaviors have become much more manageable. Here are some of the reasons I love using the TAG, and some of the ways I have used it:

First, of all behavioral interventions generally available, TAG is by far the least expensive! We all know how much an ABA program costs, however, with a $1.35 tagger and a pocketful of candy treats, almost anyone can do positive behavioral intervention. Just read the back of the tagger: it says “TAG, don’t nag,” and this is all you need to do!

Second, anyone can learn to TAG a child with autism in about 5 minutes: just watch the child, wait for him/her to do ANYTHING positive (turn towards you, touch a toy, touch a book, stand nicely, sit nicely, jump on the trampoline, open a door, look at the ringing phone, say a word), then TAG and treat. What a great way to supervise a child! So quick, so simple, so easy to teach to a teenage babysitter or (if you are really lucky) a relative or friend who is willing to help you with your child.

Third, TAG gives parents a strategy for managing a child during those many, many times when we have to deal with truly horrible, unimaginable behaviors.

Examples of how I have used TAGteach--

I have used TAGteach successfully to teach my child to go on long walks, navigate through parking lots, go to the grocery store, fall asleep at night, and reduce verbal stimming.

Here is an example of how you could use TAGteach with such a child at the playground. Now the playground can be a very high stress environment for a kid with autism -- lots of loud, shouting, running kids, lots of strange contraptions, and your own parents who are urging you to climb up that scary ladder and go down a slippery slide. Armed with your tagger and treats, start tagging every single “good” muscle movement that he/she makes. Child looks at slide, TAG! Child takes a step, TAG! Looks at bird, TAG! Turns (even partially) toward you, TAG! Puts his foot on a step, TAG! Reaches for a bar, TAG! After a while, the child will calm down because he is being reinforced for whatever he is doing, no one is pushing him to do things that are scary, and he can begin to rely on the clicking sound for information. Karen Pryor writes very eloquently about how the tagger is far superior to the human voice in conveying information to a learner because the click sound does not carry all the pesky emotional information that is embedded in a human voice. With no emotional input to deal with, the child can focus on what he/she is doing and learn that putting his feet on the first step of the ladder will earn lots of tags, and maybe going up another step will continue to earn tags. This is a great way to calm the child, encourage him/her to explore, and it eventually becomes a communication medium between the child and the person doing the tagging. This type of interaction opens the way to communication. I have even had my son come over and tag himself if I have forgotten to tag him for something good that he has done – it’s as though he is saying, “hey Mom, I did this great thing and you forgot to tag me!”

In conclusion, TAGteach has helped us manage some very difficult behaviors, and I firmly believe that it has huge potential to do even more for our kids – we just have to be diligent and creative about using this wonderful method. Even more important than the specific behavior issues noted above, the whole TAGteach methodology can quickly give parents (who are usually not board-certified behavior analysts) an effective and inexpensive way to look at the child’s behavior and think about reinforcing whatever positive actions that child is doing, and stay focused on reinforcing good behavior. Once parents have this concept, they can more easily deal with the many distressing behaviors that our kids with autism exhibit.

More of our blog posts related to autism