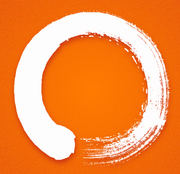 Theresa McKeon, one of the TAGteach founders has been invited to speak at a high tech incubator, where the industry leaders of tomorrow come to learn and help each other grow. The host of this event, Habit Design is the largest national cooperative for sharing best practices in developing sustainable daily habits via Behavior-Change Psychology, Captology (Persuasive Technology), Game Mechanics & Techniques, Behavioral Economics, Sociology, etc.

Theresa will present a mini-workshop introducing TAGteach and how this fun and focused approach can benefit anyone who wants to build new habits in themselves or others. TAGteach is based on the science of learning and  the findings of B.F. Skinner. Dr. Julie (Skinner) Vargas says of TAGteach "This is what my father would have wanted for his science".  TAGteach provides a user- friendly way to apply the principles of behavioral science to any endeavor that involves human behavior change.

Click here to become a member of Habit Design

Click here for more information or to register for this event


Karen Pryor on the Neurobiology of TAGteach


Purchase the full length version of this video 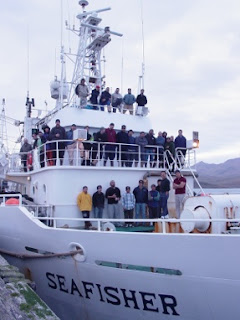 They say it’s good to move outside your comfort zone. Over the years, I’ve had a terrific time pushing that zone wider and wider. I’ve also found that when you team up with new people, the comfort zone is infinite.

The world has gotten a sneak peek at commercial fishing operations through cable shows such as "Deadliest Catch". The drama on these shows is heightened with editing, but the dangers and difficulties of working in close contact and difficult conditions are real.  Training is primarily for safety purposes and is often antiquated.  Injuries and poor quality control can sink a ship, but employee training on dangerous onboard machinery is virtually zero.  Tim Mientz, the former owner of “the Seafisher” describes his early attempts to bring productive training aboard his ship.


“I spent many thousands of dollars, got my crew together from around the world and brought in a professional suit-and-tie trainer. After two days, all I got from him was a suggestion that the guys take more time off and have some sort of Kumbaya picnic on an island somewhere. Are you kidding me?”

Tim realized his industry urgently needed specialized training and decided to get the ball rolling. Banding together with his safety regulations consultants, Amy Duz and Erika Seather (IWorkWise) the group did some research which led them to TAGteach International and Terry Ryan of (Legacy Canine and chicken training camps). Tim and Amy tasked us with creating a three day training program for crew and management, which would focus on the specific needs of commercial fishermen and processors. In some aspect or another, we were all about to go outside our comfort zones.

The TAG Team, as we have come to be known has been around for 6 years and we have certainly broken the ‘suit and tie’ mold. The training looks something like this -

Fifteen to twenty men and women from every position on and off the ship arrive from points around the world. There are at least four native languages and some that don’t read or speak English. Graciousness is the first thing you notice. Everyone is on-time, sitting in seats, looking forward, and ready to go. After an introduction by Tim that includes attendees wining cold hard cash, the first eight hours is a crash course in clicker training chickens!  Terry dives in and takes the group through the foundations of operant conditioning by teaching them to recognize and shape discrete behaviors in chickens. The group learns that trying to force a chicken to acquire a skill is frustrating and a waste of time. Using the knowledge of the science of behavior to identify and change both the behavior of the chicken and that of the teacher is the path to success. That lesson crops up throughout the entire three days.

On the second day of training, I introduce TAGteach. We make the transition from shaping chickens, to communicating and training people. The connection comes early, and the Aha! moments come in tidal waves.


The day is full of finding ways to incorporate TAGteach tools, especially the focus funnel into training.

The third day is led by Tim, Amy and Erika and once more the focus is on transition.  It’s a day of safe and open discussion about applying the information from the workshop to specific applications on the ship. The discussions can get heated, but they are tempered by shifting the focus back to problem solving instead of problem blaming.

The three days are intense, but peppered with time for brain rest, smoke breaks, meal times and communication opportunities for the crew. We use real poker chips from the local casino to inspire participation and fun. The poker chips can be used at the casino after training or turned in for cash. We’ve seen real success stories as crew and management have used the class as an opportunity to tackle issues of the past and set up for success in the future.

Way Out of Our Comfort Zone

The commercial fishermen came into a classroom full of chickens and thought, “Way out of my comfort zone”.  But after proper introduction, they were cooing and petting the chickens as if they were family dogs.  At the end of the workshop they were still in conversation about potential applications of TAGteach. “We can use this here.” “I can see that will help there”. They had successfully increased the comfort zone.

I came into a classroom full of commercial fishermen and thought, “Way out of my comfort zone.” But I was soon talking behavior and audible markers with the captain of the ship as we created training plans together. Together with Tim, Terry, Amy and Erika, I had kicked the edges of my comfort zone.
What’s next and who wants to go with me?

Tweet
Posted by Joan Orr at 6:27 PM No comments: 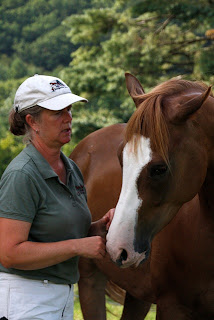 I was at a clinic with Alexandra Kurland (I had been clicker training horses for many years) when she mentioned that since I taught kids as well as adults, I should try TAGteach. When I asked what that was, she used the following example, "you ask them to keep their position around a 20 meter circle and if they do, then click them and they can go jump the cross rail". I think my jaw dropped. What a brilliant idea.  I remember saying that I could have left the clinic right then and there and I would have gotten my money's worth (but I'm glad I didn't because there was more great stuff to come). My mind went wild with the possibilities. I couldn't wait to get home and try it. Kids love to jump - they don't like to work on position so much. There was a perfect way to work them together.

Back at the farm, I put it to work. My first efforts have thankfully blurred in my memory but at the time, I thought I was doing great and the kids were happy. Being an education junkie (I love to learn), I found a TAGteach seminar "only" 6 hours away and signed up. Both Theresa and Joan were there and expanded my enthusiasm further. As a riding instructor, I felt that if I wasn't talking constantly, I wasn't earning my money. In that first seminar, I had the HARDEST time trying to shut up and let the learners learn. During one of the exercises, I repeatedly talked too much rather than letting the clicker work its magic. When I rolled my eyes in disgust at myself, Theresa said, "tag point is, lips sealed."  Bingo. That was all it took- the power of a tag point right there for me. I could give my instructions and my tag point and then focus on "lips sealed".  And I did it!

At that time, I had a challenging student (competitive adult) who criticized herself constantly. The TAGteach seminar group took on my challenge and helped me brainstorm ways to help this individual. I remember going to her next lesson and pulling a piece of surveyor's tape off a nearby post to tie in her horse's mane where I wanted her to place her hands over a jump. Tag point is: hands to tape. She continued being hard on herself, but I was able to ignore it and focus on that tag point. This helped her be successful so that I could walk away from that lesson and know that rather than just soothing her, I had made a concrete improvement in the way she was riding which would have lasting effects.

Yesterday I asked a current student what TAGteach meant to her.  I have tagged her for management skills, handling skills and riding skills. Her response:


"Knowing I can break any problem into "tag" moments gives me hope that I can actually fix anything, or learn anything, that I need to."

Jane is a Level 2 TAGteacher with many years of experience training horses and teaching riders both children and adults. Jane will share some her insights and techniques for using TAGteach to help make learning more fun and efficient in a webinar on June 5, 2013. We are grateful to Jane for doing a terrific job of moderating the TAGteach Yahoo group and for finding and sharing new and inventive ways of teaching.

Click here to register for a webinar with Jane for tips and ideas about using TAGteach for riding instruction ($9.97 for members; $19.97 for non-members)

For more information about Jane, visit BookendsFarm.com and check out her blog at bookendsfarm.blogspot.com
Tweet
Posted by Joan Orr at 1:52 AM No comments: 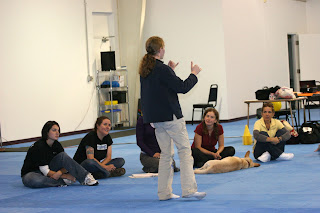 In a  prologue to the next TAGteach webinar (May 13, 2013)  Say More and Talk Less, this post looks at the possibility that when a teacher talks less, they are also giving the student the chance to say more – to themselves!


The Sound of Silence


A teacher has just delivered a lecture detailing the “when, where, how and why” of a particular skill to a group of students. Next, the teacher consciously reduces the amount of language, crafting clear instructions and well-defined criteria for success. The students seem eager to try the skill and the teacher gives the all clear. There is a moment of silence as the teacher cedes control to the student. A battle ensues. The battle is not with the student, but with the silence.

Silence right before student performance is teacher Kryptonite. It weakens our resolve and claws at our confidence. We race through a mental inventory. “Did I tell them everything?”  “What will I do if they fail?”  “Should I explain this in greater detail?”  “Should I add some last minute encouragement?”  The itch is too great to bear and in our last gasp, we add, “don’t forget…” along with the always beneficial, “remember what we talked about” and finish with a combination smile/thumbs up gesture.

Teachers, you can save your breath. If you've been delivering your information using a focus funnel and a focus/tag point, your students are far from flailing in the momentary silence. The silence is merely an indication that your student has steely focus on what they are about to do and the criteria needed for success. They have transitioned to talking to themselves. This transition is essential if the student is ever to perform the skills solo.

During new skill acquisition, last gasp instructions can disrupt the very focus you and your student worked so hard to create. Savor the silence as a job well done. When you talk less, you are giving your students the OK to say more – to themselves.