TAGteacher Tale: I Cried Like a Baby for an Hour 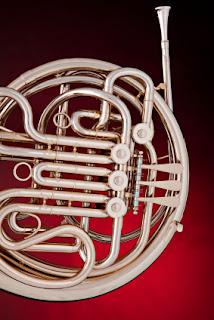 My name is Kelly Drifmeyer, I’m a classical musician on the Horn (French Horn), and a college professor at the Crane School of Music, SUNY-Potsdam. I’ve also trained and enjoyed the company of golden retrievers for 24 years.

I first woke up to the idea that I could learn and teach in a different way about 23 years ago. My early learning experiences as a hornist were with artist-musicians I think of as “old school” teachers. They learned how to teach from their teachers, and they from theirs, back to the European masters of the instrument back to who-knows-when. What they all had in common was a thick language of instruction on “how” to do things, and a negative and often punitive style of correction when you didn’t do those things right. There was one right way – their way – and to not follow instructions to the letter, or not provide the ideal result, was an invitation to a browbeating, embarrassment, or demeaning and sometimes harsh verbal correction. “You’ll never be successful sounding like that…that’s not good enough…you better find a different career,” these were all commonplace comments in both my own experience and the experiences of my fellow students. None of us liked it, but it became a badge of honor to survive lessons under those conditions and not break down.

When I started my own music teaching, it was about the time I also began formal dog training. In the early ‘90’s in my area this consisted of the “jerk and release” methods of instruction and correction. You said “good girl” in an anemic sort of way if they did it right, and yanked them around on the end of a leash when they didn’t. My first, sensitive golden began to avoid me on training nights, and at home she would startle and cower at the slightest raising of my voice – whether it was meant for her or not. We stopped training, how could I keep abusing my sweet girl like that? I finally went hunting at the bookstore for something different (this was pre-Google!) and stumbled upon “Don’t Shoot the Dog!” by Karen Pryor. I read it, and re-read it, and felt immediately guilty for being so stupid when there was such an obvious alternative. A “clicker” wasn’t easy to come by, but I found one eventually and off we went into dog training happiness.

It was quite a while later when I connected the dots to myself, and to my horn students. My early training (and being a perfectionist) had left me with a pile of mental self-abuse chatter that turned “on” every time I picked up the horn. I couldn’t practice, rehearse, or perform without a stream of negative thoughts flowing through my head. I almost quit the profession twice. I struggled with auditions, the one and only way to get a job in the performance field. I played beautifully at times, and had meltdowns at others. Nothing was ever “good enough”, so the angry commentary never stopped. Worst of all, I saw the same attitudes and negativity in my own students.

Tagteach isn’t where I started, but it is where I ended up. I tried the Artist’s Way, the Inner Game books, Peak Performance ideas, even “positive speaking” models, nothing solved the problem completely - until I picked up my dog clicker and used it on myself. I gave myself one task, used positive-only feedback, and ignored the bad stuff because it didn’t matter. The first time I tried it, I cried like a baby for an hour. And then went back and did it again.

I used this method for several years on my students and on myself before I discovered TAGteach in 2010. Another revelation – I wasn’t secretly doing something bad by using my dog training skills on my students, other people were doing it too! I read every inch of the website, watched every video I could find, took the online class and wanted more. In Spring 2011 I went to my first workshop with Theresa McKeon and it was amazing! I didn’t have the easiest time there – I had been using a self-taught method with a more relaxed structure, and I struggled with the new format and new terminology. But with practice has come an understanding of how the language of TAGteach helps me define my own thoughts, and helps my students with their own frame of reference.

I now use tagging regularly for specific tasks with all of my students. They universally respond in a very positive way, and many of them will ask for a tagging session when they find they’re struggling with a particular activity. I don’t use it every lesson, or for everything, but its an invaluable tool when working on high stress or high frustration problems. I find it to be especially effective when working on more physical issues. Musicians frequently work with muscles on a micro level – tiny, flexible motions of tiny, fragile muscle groups. Stress and tension can ruin the ability to use these muscles correctly, and I’ve found tagging lowers frustration, which lowers tension, which creates a calmer, more relaxed learner. And like magic, the relaxed learner is a successful doer.

The “magic” of TAGteach was brought home to me just a few weeks ago. I have a new student, “Amy”, who is bright, hard working and dedicated. She is also a mental and physical mess – tight, twisted posture, loads of tension, and a low threshold for frustration. She gets upset at the smallest things, and I sometimes walk on eggshells trying to get her to correct a problem without having a full-on meltdown. I’ll be honest – Amy was not my favorite student. I was irritated by her touchiness, and I’d lost patience with her meekness and sensitivity. It was no surprise that in a recent lesson, I found myself correcting, and correcting again a singular problem she could not seem to manage. I was getting frustrated, my voice was getting louder - when I noticed her hunching lower and lower in her chair, getting smaller and tighter at every attempt. Just like my sweet, sensitive golden almost 20 years ago.

Stop, I said to both of us. I took a deep breath and picked up my tagger. “This is a tagger. When you hear this sound - *click* - you’ll know you’ve done it right. If you don’t hear the sound, just try it again, no problem.” That’s all I told her the first time out. I took her through a focus funnel – explained what we were doing, then defined a single task, then gave her a single tag point – and off we went. And I felt stupid all over again for not having done it weeks earlier – she was finding success within ten minutes. And more importantly, she was then able to successfully integrate the new skill into a larger, more complex format. She also remembered, and repeated, the newly won skill for me the next week, and the next.

What’s most interesting to me about this story? I like Amy more now than I used to. We’ve found a way to communicate that takes some of the friction out of our relationship. She learns more confidently, and I’m also more relaxed, knowing I can say what I need to without hurting her.

TAGteach is an elegant, simple, precise language I use to interact with myself and with others. It’s a gateway to learning and teaching that bypasses the traditional use of negative feedback that so often produces frustration, stress, anger, and resentment. The teaching of musicians is shrouded in those traditions passed on through generations. That seems great to me in “what” we learn, but “how” we learn it needs some help. TAGteach resolves so many of the barriers to effective learning and retention, I’m spending a semester on sabbatical in 2014 to improve my own understanding of TAGteach and show others in my field how useful it can be.

TAGteacher Tale: A Winning Approach to Transforming Your Instructor 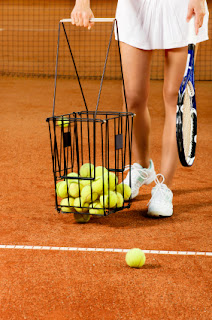 TAGteacher Joey Iverson has successfully introduced TAGteach to the tennis world, although she said it’s for selfish reasons. “I want to be the best tennis player I can be and that will happen faster if my coach uses TAGteach!”

"I explained a few of the tools to my coach Grant Grinnell (USPTA) and he was willing to give it a shot. After just a few tries, he was totally sold on the value of TAGteach and the powerful learning it facilitates. He commented that there was more improved play in my game within a single lesson. He also noticed that although it was easier to get information to me with the marker, it also required a different focus. In a group lesson he is usually trying to take in what each of the players is doing. To tag me for the skill, he had to momentarily keep his focus on just me or he would miss the marker timing. Both of us had complete focus and that brought about immediate improvement."

It seems Joey’s coach is as excited about TAGteach as she is:

The word is spreading fast. After watching a TAGteach session between Grant and Joey, another coach, Chad Smith USPTA wanted in. It wasn’t long until he found exactly why TAGteach worked for him.

“TAGteach worked for me because I could mark the exact point I need my students to feel in my lessons. My students quickly associated the tag with what I was trying to get them to understand in their technique. It made my instructions that much more effective.”

Thank-you Joey for spreading the word effectively and kudos to Grant and Chad for being coaches that are open to new concepts that improve learning for their students! 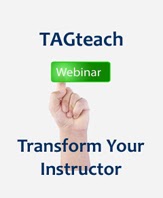 Join us for a webinar with TAGteacher Joey Iversen on May 20, 2014 where we will learn about strategies for helping to transform your instructors, teachers or coaches so that they can begin to teach the way YOU want to learn. Click here for more information or to register.

BONUS! Register for this webinar and you will get a discount code for 25% off our recorded webinar: Sport Coaches: 4 Thing Your Athletes Wish You Knew. This webinar covers specific details of TAGteach for Sport Coaches.

DOUBLE BONUS! Register for the Sport Coaches webinar recording and you will get a free pass for your coach or instructor. 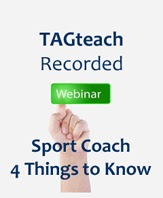 Tweet
Posted by Joan Orr at 4:25 PM No comments: