Writing is a basic skill and something all kids struggle with to one degree or another. Every parent has seen the frustration of a child trying to make the letters look right, but not quite managing it, the inexplicable repetition of the same error over and over. The child knows it is not quite right, yet can't seem to change what he is doing. Drawing attention to the error in order to help correct it often results in floods of tears.

TAGteacher Madeline Gabriel sent us two short videos that illustrate how she used TAGteach to help her sons with their writing. In the first clip, the tag point is "pencil to the line" and the child is self-tagging. This is a great way for him to develop increased focus and interest in the task. He knows exactly what he has to do and he can see when he does it right. This is a good tag point.

In the second video we see another tag point, this one to help with letter formation. Andrew was creating e's with a big loop and becoming very frustrated. Here's what Madeline had to say about the situation:

The thing we worked on was lower case "e". I was amazed that we were able to come up with a tag point of "that way" to help him feel how to draw his straight line across and then immediately go "that way" (up and to the left) vs. the little tiny extra poofing out to the right he was doing.

It's hardly any difference in pencil movement, but it makes ALL the difference in keeping the shape of the letter in proportion. We did it by me holding over his hand holding the pencil and making the movement together with a tag as the pencil went "that way."

Andrew could articulate to his dad exactly what the tag point was and I could clearly see him move his pencil very deliberately.

Just FYI, I'm really not a terribly picky mother! I know to some people this may look like nitpicking, but I meant it to show how precision doesn't have to be hard. It's just as easy for him to do it "correctly" with TAG and he's very confident and proud about his e's now.

I mostly leave him alone to do his own thing, but I had to start tagging again when he started saying, "I hate e's! I'm really bad at them!" and he had ten pages with lots and lots of e's. I was seeing hours of erasing and crying stretching out before me and I'm definitely not into THAT!

See the images below to see the problem with the "poofing" out to the right that was causing misshapen e's: 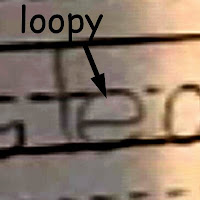 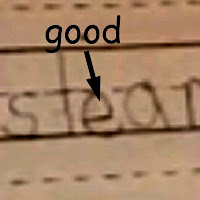 Together they decided on the tag point "that way" which means "move to the left right away after drawing the horizontal line". This is a great tag point because it causes the movement that results in a correctly drawn e. There is no point in using the tag point, "draw a good e" because if Andrew could do this he would, he just doesn't know how. We discussed tag points that "make it happen" in a previous blog post.

The above provide two good examples of creativity and good tag points that help the learner focus on one thing and be successful.
Tweet