Reposted from http://chroniclesofaclickertrainer.blogspot.ca/ with permission

Since the early 80’s my work has involved working with people – teaching them, tutoring them, training them. Most of that work has been with children with a large chunk in the middle involving adults in the business environment. A theme that ran through nearly all my work was changing behavior – helping children with special needs fit into a classroom environment, working with people new to English acquire another language and engage with a different culture, assisting employees of a large retail organization to improve their performance, helping a large corporate organization get back on track with failing projects…the list goes on. 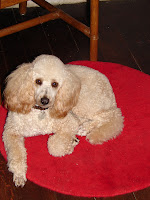 After 30 years of working with humans I made the switch to working with dogs. My primary reason for doing this was the new addition to our family – a traumatized miniature poodle named Blue. It was during my study with the Karen Pryor Academy last year that I first learned about TAGteach and since that first introduction I have been curious as to just how well it would work with humans in all the circumstances in which I have worked.

In May of this year, I certified as a Primary Level TAGteacher after completing online the comprehensive TAGteach IntroductoryCourse and keeping a journal throughout of my progress – both with the course itself and with TAGteaching. At the time I only had a few students and it seemed the right time to immerse myself in this new philosophy of learning and to really come to terms with all of its uses.

In any sort of training environment there are always doubters – whether it be the teachers of the students I tutored or their parents, a disgruntled manager considering that the training was a waste of time, or the students themselves believing that they’ve never been able to do this before so what makes this approach any different. In the past I have been used to dealing with this sort of response but it was not until I came in contact with dog trainers and owners that I experienced for myself how easily it is to question what you know to be true and revert to the “way everyone else does it”.

I found my students were so conditioned at focusing on what their dog did wrong and trying to correct that, that it was difficult to convince them that their dog’s behavior would change if they just focused on what it was they wanted the dog to do. I needed a new set of tools to deal with these situations so that I could demonstrate what I meant through the way I responded to my student. My normal approach of positive praise was not powerful enough – it lacked timing, accuracy and specificity – what exactly was it that they had done well? I found it increasingly difficult to answer this question when I came to write up my session notes. It occurred to me that I needed to change my approach and TAGteach seemed the most obvious choice to do that.

The TAG of TAGteach stands for Teaching with Acoustical Guidance and this approach is all about enhancing performance on any level in any situation by identifying what it is you want the subject to do, specifying it articulately and tagging (with an audible marker) every occurrence while ignoring everything else. It is clicker training for humans… and it works!

I tag everything now – my dogs, my husband, my clients and myself. I’m even starting to think in tag points and that has probably been the most beneficial aspect of this learning for me. What is it I want to achieve? Ah, yes…and the tag point is…

TAGteach has reaffirmed for me that there is always a way to get the behavior you want, you just need to be creative in your approach and engage the participants as much as possible. This is not just conditioning or behavior modification, though those are very much behind the science of this technique, rather it is more about clearly defining what it is that you are after in a behavior and expressing why.

The course required the completion of exercises at every stage and many of them required me to take a look at myself – at home, at work and at play. I was asked to look at things I wanted to change and to see them from a different perspective – how I want them to be. I learned to shift my focus from what was bugging me, to the much more positive – what would I like to see?

One of the many success stories I’ve had since completing the course was in the enhancing of domestic bliss. One of the issues I have in my home is that my kitchen is not large enough to accommodate me and my mode of cooking let alone play host to all the empties we seem to accumulate during the week. Ever since we’ve lived here I’ve nagged my husband to “Please put the empties in the recycle”, every morning there they are, neatly stacked on the corner of the bench and it is left to a rather disgruntled me to move them into the recycle box in the hallway.

One of the TAGteach mottos is “tag, don’t nag” and it is so true. Rather than continue to nag Martin about the bottle dump, I decided instead to engage him in the process. I explained my situation and my understanding of his. He told me that there was no malicious intent in his forgetting to recycle; he’d simply got into the habit of leaving the bottles there, a behavior that was hard to change when he was tired and focused on other things.

What an eye-opener that was to me. And since then I am seeing more and more how much of the behavior with which we are dissatisfied stems from patterns of repetition that are hard to break simply through being told. I invited him to engage in an experiment with me.

I’d learned all about the focus funnel in my course and while I could see how it would work in a teaching or coaching environment, I was curious as to how it would work in changing patterns of behavior between mutually agreeable participants.  The focus funnel literally draws together all the bits of information you want to get across and pulls them into a tightly constructed TAG point. I wanted to try this with our situation and Martin, the champ that he is, was willing to go along with it. 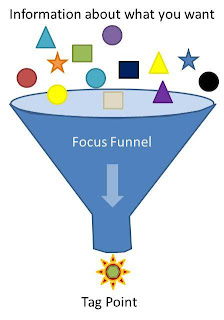 It became clear as we discussed options that there were several behaviors in need of modification: glass bottles, jars, and cans needed to be rinsed, plastic bottles needed to be crushed and recapped, and all needed to be put into the recycle.

TAGteach is all about focusing on one behavior at a time and as the ultimate behavior was to have a clear benchtop, I decided to back-chain the behaviors. Get the items into the recycle bin first, then work on the rinsing and the crushing at a later date. We came up with three tag points, one for each behavior.
Using the protocol for forming a tag point, we articulated them thus:


My job was now simple, all I needed to do was state (or create a sign) that articulated the tag point for that day, tag whenever I was present and leave it to Martin to do the rest.

Promoting behavior change is all about reward and reinforcement, whether it be intrinsic – the satisfaction of achievement, or extrinsic – getting paid for a job well done.  TAGteach International know this well and have devised an ingenious means of tracking tags received and trading them in for something more tangible – the tagulator. I have dozens of them that I made for my clients (they earn them with tags) and I gave several of these to Martin. 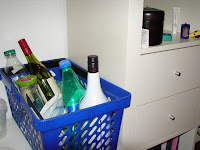 Simply put, the role of a tagulator is to record a tag whenever it occurs – Martin’s hang in the hallway, opposite the recycle bin and a tagger (clicker) on the shelf. Bottle goes in bin “tag”, slide a bead on tagulator.  The process has been going since our meeting on June 2nd, and in that time Martin has accumulated 67 tags. The top tagulator records every tag, and the second tracks the number of times he fills up the first tagulator – when the bottom tagulator is full, it’ll be time to cash in on any one of a number of “treats”.

Besides reflecting on the number of empties we go through in a month, it’s a very visual way of recognizing the effort that has gone into changing the behavior. I haven’t been involved much in the process since we set it up, other than to notice in passing the number of tags being accumulated. When I asked Martin why he still continues to do it he said, "it’s about presence of mind, committing to the whole process breaks the habitual behavior”. When pressed further he put it this way: “even though I’m the only one recognizing it, it gives me a nice feeling that I am being recognized for doing it.” 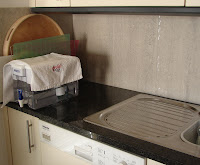 Is he convinced that TAGteach works? Absolutely, to the degree that we are now devising ways for Martin to incorporate TAGteach at his work.

Am I pleased with the result? Totally - the evidence accumulates daily on the tagulator, but more importantly, I have a clear bench and there is no more nagging – now that’s a definition for domestic bliss. TAG!
Tweet