From the Archives - Theresa's TAG Journal, 2003

I was looking through old files and came across this excerpt from Theresa's journal documenting some of the earliest experiments with TAGteach with competitive gymnasts - thought you would enjoy! Note that this was before we came up with the tag terms, so the clicker terms are used. 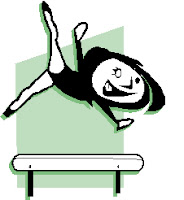 Jan. 3/03 The optional team has been watching the compulsory team “playing” clicker games for a week now.

The response in the beginning ranged from mild interest to a quote from one girl of “not me, I don’t want to be trained like a dog”. I pulled her aside and explained that the clicker was not just a way to train dogs. This was a highly scientific way to communicate with her nervous system. We could speed up the time it takes to make corrections and therefore it would require fewer repetitions of elements and would take a lesser toll on her body.

Ok, she would give this a try.

The first opportunity for the optional team to click was a vaulting rotation. We use the Tumble Trac (a long tight trampoline, used for tumbling and vaulting drills) a great deal. During this rotation we were doing front layout drills used in the training of front handspring vaults. I began clicking the girls at the exact point they found the tight heel drive position while flipping over a mat into the resi-pit.

They were amazed at how late they were hitting the position. I had to give them proof by showing videotapes of themselves. The girls saw that the timing of my click and their position was exact. This helped them “trust” the clicker. Trust is the most important element in the coach-gymnast relationship.

During this rotation I heard a shy “can I try that clicker thing”. YES! This came from the same gymnast that didn’t want to be “trained like a dog”. The girls were coming to me.

Everyone wanted a chance to be the clicker boss.

I had to film their faces. They were totally focused on the exact points I had been begging them to think about. Now they could turn that visual internally and focus on their own positions.

I think the gymnasts realize that this is a step up from teaching “Fido to sit”. Should I tell them Fido was easier to teach?
Tweet

Email ThisBlogThis!Share to TwitterShare to FacebookShare to Pinterest
Labels: gymnastics, history of TAGteach