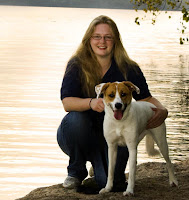 We love to hear of people who learn about the principles of learning and can then apply those in another situation. Thanks to TAGteacher Rebecca Lynch for allowing us to reproduce her story here.

Yesterday was my second session with a very nice couple and their springer spaniel pup. As I was leaving, the husband asked if he could walk me to my car and told me he had a story to tell me. Ron is a 7th grade school teacher. He told me that he had a program in his class where he put the kids in teams and at the end of the week, the team that scored the most points (for doing assignments, bringing their books, etc) would get brownies. The problem he was having was that there were two boys that were trouble-makers. Nobody wanted them on their team because they'd never win.

Ron started thinking about what I had taught him about dog training. Reward the good behavior. He decided to try it out on his kids at school. So he put the two boys on the same team and set out to find something that they could be rewarded for.

It didn't take long. The boys managed to be the first to be seated when class started. Ron started putting check marks by their name on the board. He continued as they remained seated and the other kids were still milling around. After 5 or 6 check marks, one of the other kids remarked, "Mr. Ramage, why do they have all the marks?" He replied, "Because they are sitting quietly at their seats".

By the end of the week, the two boys had done their homework and turned assignments in on time. They brought their books. They quickly sat down when they came to class. AND they won the brownies.

The other teachers were amazed.﻿  I'm hoping that Ron will teach the teachers how to do the same.  Of course, I immediately sent him to www.tagteach.com.

I'm really proud of him for thinking outside of the box and applying the R+ theory to not only his dog, but his students.  I am really looking forward to future sessions with him!