I haven't had the opportunity to implement tag teach for my baseball team to the extent I had hoped as of yet because of the weather here and the availability of players. Although they have all expressed interest and excitement at the prospect so that is a definite good start. 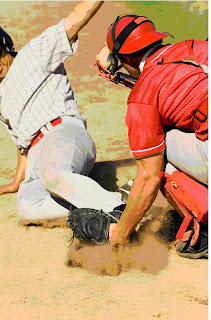 I have had the opportunity to work with one of my players however and I am very excited about the results. This player has played with me for years, he rarely hits it out of the infield, and usually gets on base because he is so incredibly fast or the other team makes an error, rarely because of a good hit. We went to the batting cages to get some practice, and as usual his first round he was hitting soft ground balls that would more often than not lead to an out. Watching his swing I noticed that when he rotated his hips to hit his back leg was overturning and his front leg was under turning.

Watching a bit longer I realized this was because of a problem with his initial stance, so we had our starting point and first tag point. I pulled him out of the cage and explained how I wanted him to set up in his stance, and that I would tag him for the proper stance then he can swing away, we were focusing on his stance. After maybe 2 minutes he was automatically without even thinking about it getting into the proper stance. I couldn't believe how quickly the change occurred, I have never seen anything like it. Then we started working on rotating his hips properly as he swung, having already corrected his stance this only took about a minute. Finally I explained to him how he should finish his swing after hitting the ball which is something no one ever explained to him before. Being entirely new to him this took about 3-4 minutes until he was consistently being tagged for it.

So after less than ten minutes of tagging he went back into the cages, he hit all fifteen pitches, and most of them solid line drives that would be at least a double, with his speed possibly a triple. Most importantly he was excited, I've never seen that excitement in an adult before. He sent me an e-mail a few days later to tell me he had gone back to the cages to practice what we worked on and he's doing even better.

If I wasn't convinced before I am now, to help a person improve that quickly and become excited about learning, this isn't the best thing since sliced bread, it's better.