TAGteacher Tale - I Changed the Way I Teach!

Thanks to Marcia Nelson who tells us how learning about TAGteach has changed the way she teaches... 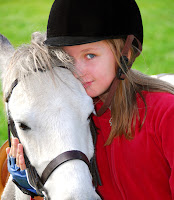 I have turned my teaching style upside down from my old ways when I was introduced to the TAGteach system complete with taggers for my students a few years back at the Clicker Convention in LA.

I've used it now for several years with children in their horsemanship and riding lessons. I use it when I see something they do extraordinary in remembering something they were taught. I use it to set up a challenge for them that either they set up or I set up and I use it for other kids in the class to watch for something that their classmate is working on.

I find that children can only hold a small amount of instruction without being discouraged because coaches like me that are perfectionists tend to find what still needs fixing and forget how much is going well!! Especially when they are riding a horse because there are sooo many elements. I let them know we're picking only one thing to tag, the rest of the things can be whatever, we're only looking at one thing. What a mind blower it is for kids that think they have to get it all right or nothing!! It helps me to keep it age & maturity appropriate for each child this way too. The funny thing is that once we have positively worked with them on something and go to another item when it is good is that they stay pretty darn good on the previous thing we worked on and so we build them up while only focusing on one item at a time!

I have a very bright young one that is succeeding very steadily with this process as I shape her a bit at a time and don't worry that it is not all being fixed in one setting. I'm jazzed to see where she has come in just two weeks of working the tagger system. Prior to that she was good the first few lessons when it was all new and then she knew it all and was like a greased pig to keep in line and heading in a steady direction which is an absolute necessity around horses.

Finding a balance with each personality is sure a necessity and it has to be shaped over and over as you go. Who says we aren't creative artists?? This is incredibly artistic to sort out and keep moving in a forward positive direction. 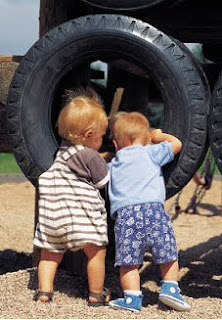 In a previous post we talked about some reinforcers for toddlers and today we will hear from two mothers of toddlers who are also accomplished clicker trainers and TAGteachers. How lucky are these kids to grow up with positive reinforcement-based parenting right from the start?

From Keri Gorman - Getting Started

I've been tagging my 2 year old son since he was about 16 months old. Hopefully I can add some ideas that worked for us, but as I'm quickly learning, human animals do not seem to be as straight forward as non-humans :)

When I was just introducing tag, I would do it when we were engaged in a fun game and would only do it for a few minutes and then bring it out again a few days later. This seemed to help keep his interest, it was a novelty to him. I would tag him for doing something I knew he would be successful at and had fun with. For him at that age it was a little sorting cube. He already liked putting the shapes in the cube and was good at it so I would tag him for the correct responses followed by my praise.

We did the same game with sign language. I started with his favorite signs and signs he knew really well. I would tag him for signs that he really liked and had a 100% chance of getting right. I gave him the tagger for this game and would ask him, "Is this the sign for 'more'?" (i would do the sign for 'milk' and he would shake his head no) I would then ask him "Is this the sign for 'more'?" and then do the correct sign for 'more' and he would tag me. it was a great way for him to learn that tagging meant "yes, you did it right"and that incorrect answers didn't get a tag. I was really structured when I gave him the tagger and made the session short and sweet so he couldn't get carried away with it. I would give a very clear "all done" sign and quickly move onto another game or toy.

It was only after he bought into the game did I attempt to use it for washing his hair or changing his diaper. He was in the bathtub and we were having the usual struggle of rinsing his hair and I just stopped and said, "do you want me to tag you?" and he nodded his head. I didn't have a tagger or a reinforcer, but just did a tongue click followed by praise and that was totally enough. As for diaper changing, a hair rubber band turned out to be a perfect reinforcer. He likes shooting rubber bands (you could use a ball or something else to throw) the great thing is that the item leaves their hands and you have to go pick it up and hand it to them again, which sets you up to tag them again right away.

Toddlers are SO smart and I'm not sure I could ever "train" mine to do something. I think letting them feel control over situations is more powerful than anything. I don't think I would be successful with Max if I just said, "I'm going to tag you for..." I think our success has been in making it a game first off, and then giving him the option if he wants to play the game or not. If he says no, I'm respectful of that.

This is just my experience and every kid is so different, so take it for what it's worth.


From Denise Lacey - Some Toddler Tag Points
Owen's first  tag point was "Open fingers" - a wide open hand. Worked great  because I did not want to cut my hair and he wanted to grab it. He had this one mastered by seven months because I was bragging about him at ClickerExpo after  his birth. It has been very handy for lots of things - petting our cats and dogs, getting things out of his hand that he should not have (although now asking him to hand it to me works for that).

We also use "bottom down" for lots of stuff: getting in the car seat, sitting down to brush teeth or eat. He loved doing bottom down in the tub so much that he'd stand up again and crash down to make a big splash so I stopped asking for it there.

"High five" is a great targeting skill. I've used this with other toddlers as well to get them to come back instead of running off.

Many of my reinforcers are strange noises, silly faces and laughing. Toddlers seem to love doing things that cause a reaction so those all work instead of me having to carry a tangible reward around. Owen beams when I say "I LUV IT!" very expressively. 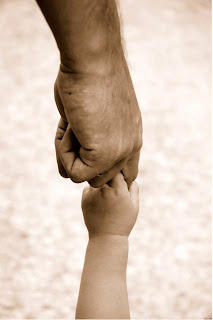 Mostly I just find that I phrase things in terms of what I want not what I don't want or what he can't do. I don't say stay out of the road, instead it is "hold a hand to go in the street." This afternoon he had dad's hand but wouldn't go in the road until he had mine too. I was not planning on crossing the street but with toddlers plans change all the time and I crossed the road.

We had three other little boys over in the sandbox this morning. What started as three moms saying "Don't throw sand" ended up with four moms saying "put the sand in the sand box." I am more than willing to talk to moms about what I'm doing if they ask but just like with my relatives, I tend to just try to be an example and let them choose what they want to do. And I do find that I repeat some tag points over and over and over and over...alternative behaviors can be self reinforcing.

Even after I had started tagging Owen, another mom mentioned an article she read that said toddlers grab things from other toddlers because that is how their parents interact with them - if they have something we don't want them to have or that we want/need we just take it without asking. That just really solidified for me how I wanted to interact with my son. Of course, there are things he can't do. I won't let him play with the stove regardless of whether or not it is on. If I give him a behavior and he chooses to persist in going for the stove, I physically move him (I am bigger and he is not a dolphin :) ). He gets very mad for a brief moment and then I can get him to do something acceptable. Seems that sometimes he is so fixated on his goal that he can't process my requests. Makes me think of "squirrel!" Mostly, he is pretty easy to redirect with a positive request for another behavior and is really getting to be quite the helper around the house.
Tweet
Posted by Joan Orr at 3:45 PM No comments: